A fitting with three openings, a wye joins (or creates) branch lines. It is a waste-fitting tee in which the side inlet pipe enters at a 45-degree angle, or an angle other than 90 degrees. A standard wye is a Y-shaped fitting which allows one pipe to be joined to another at a 45 degree angle.

Wyes are similar to tees, except for the angling of the branch line to reduce friction and turbulence. They are commonly used to attach a vertical drainpipe to a horizontal one. The connection is typically at a 45-degree, rather than 90 degrees; if a branch turns out further at the end to 90 degrees (perpendicular), the fitting becomes a combo tee. Wyes and combo wyes follow a long-sweep pattern relative to sanitary tees and other short-sweep bends, which have a smaller radius and require less space. A wye may also be used to split a branch line equally in two directions, such as the splitting of a main line into two smaller branches.

Wyes also have industrial applications. Although low-priced wyes are often spot-welded, industrial-strength wyes are flash-welded at each seam. In long-distance pipeline applications, a wye is used for pigging to maintain flow. 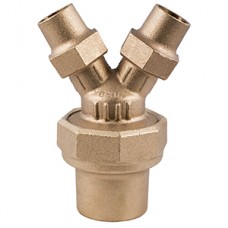 All brass that comes in contact with potable water conforms to AWWA Standard C800 (UNS NO C89833) ..